Home Votewatch » About us

VoteWatch Europe is shaping the EU policy debate with cutting-edge analysis who stems from a unique combination of big data and political insight.

We strongly believe that the stability of the European and international political and economic system is fundamentally dependent on quality and non-partisan information on how decisions are made at supranational level and by whom. As such, we report on what the real actions of each of the political actors are in the process of making decisions for half a billion EU citizens. We are therefore independent from any national or supranational governmental institution, businesses, political parties or any other entity. We self-finance our operating costs through subscriptions, paid-analyses and donations.

We provide insightful analysis and forecasts based on verified political data that sometimes substantiates, while on other times denies hypotheses that are propagated by various entities into the public sphere. In this way, we provide traction to truthful information and help reject false or manipulative news, so that the citizens and stakeholders develop their “information self-defense system”. For this reason, some of our findings go against what some people may have been lead into thinking by incomplete or biased information. We help the public distinguish between pure speculation and actual facts.

We aim to provide visibility to issues that affect all EU countries, both smaller and bigger, and all societal sectors. We mainly report on decisions that are made in the EU institutions, but we also look into developments that take place in EU’s member states or other countries and which impact on the European and global system.

We stay ahead of the innovation curve by combining scientific research with the newest technological means of data mining and communication (mobile and social media apps, infographics, website widgets). We merge sophisticated statistics with insights from politicians, institutions’ staffers and top-notch independent researchers to provide the public with real-time, data-backed analysis, and forecasts on upcoming or ongoing European and global developments.

We are based in Brussels and, since our launch in early 2009, we have achieved fantastic results, as our work is now used on a daily basis by public and private institutions, the international media, academia, NGOs, etc.

An independent study has found that VoteWatch has been the most influential EU affairs think tank in the online space. 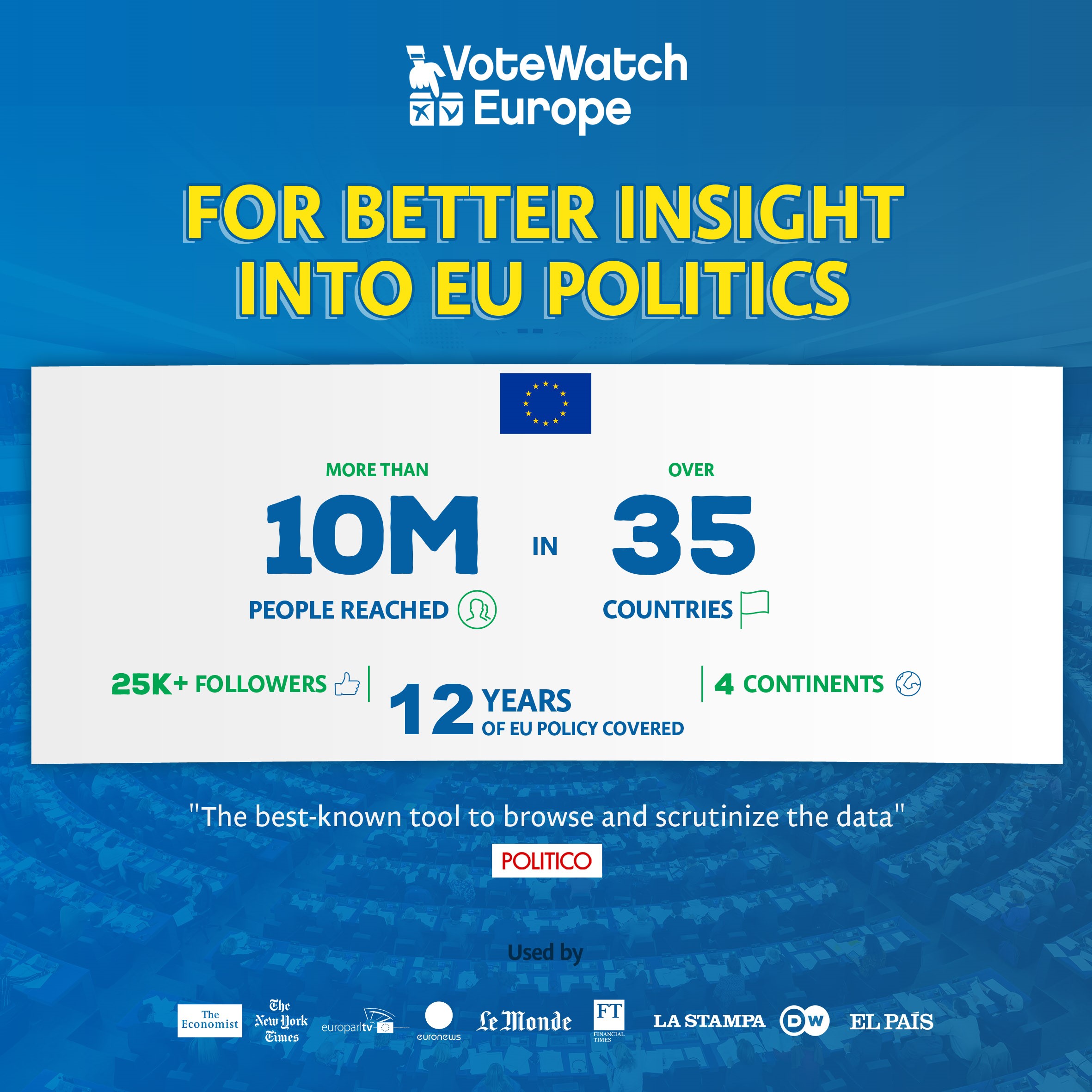 VoteWatch Europe is coordinated by a professional team that combines expertise in EU affairs, statistics and digital communication. Our core team is supported by a network of experts based in Brussels, the EU Member States and internationally, who work in the public and private sector and who provide highly valuable insights.

Co-founder and CEO: Doru Peter Frantescu. Since the launch of the organisation in 2009, Doru has headed the development of digital applications for political analysis and forecast. His data-driven reports on the actual voting behavior of Parliamentarians and Governments in the EU decision-making are being quoted regularly by reputed institutions and the media across the EU and internationally (including Financial Times, Bloomberg, Euronews, CNN, France24, BBC, etc).  A social entrepreneur and passionate futurist, Doru is also a member of the European Alliance for Artificial Intelligence. He speaks English, French, Spanish, Italian and Romanian. Email: [email protected]

Chief of Research: Davide Ferrari. With a background in cognitive sciences and European public affairs, Davide assists the team with both qualitative and quantitative research on voting records in the European Parliament and the European Council, as well as other EU-related political developments. He speaks Italian, English and some French. Email: [email protected]

Research Assistant: Sara Danesi. With an academic background in European Union Studies, Sara supports the VoteWatch team with both quantitative and qualitative research relevant to the European Parliament, as well as carrying out other tasks when needed. She speaks English, Italian and Spanish.

Research Assistant: Lisa Neri. With an academic background in European Union Studies and International Relations, Lisa supports the VoteWatch team with both quantitative and qualitative research relevant to the European Parliament, as well as carrying out other tasks when needed. She speaks English, Italian, Spanish and some French.–

Research Assistant: Talia Goode. With a background in languages and European politics, Talia assists the VoteWatch team through both qualitative and quantitative research relating to European political affairs, as well as carrying out other tasks when needed. She speaks English, French, German and Spanish.–

Research and Communication Assistant: Klaudia Woźniak. With a background in European Studies and Politics, Klaudia supports the VoteWatch team with both quantitative and qualitative research relevant to the European Parliament and EU policies, as well as carrying out other tasks when needed. She speaks Polish, English and some French.

Research and Communication Assistant: Moritz Pohlner. With an academic background in Political Science with a focus on France and Germany, Moritz supports the VoteWatch team with quantitative and qualitative research on the relevant developments within the European Parliament, as well as carrying out other tasks when needed. He speaks English, German, and French.

Research and Communication Assistant: Lucía de la Riva. With a background in International Relations, Lucia assists the VoteWatch team with communication tasks and both quantitative and qualitative research relevant to the European Parliament and EU Policies, as well as carrying out other tasks when needed. She speaks Spanish, English and French.

Chair: Dr Simon Hix (co-founder). Professor of European and Comparative Politics and Head of the Department of Government at the London School of Economics and Political Science. Hix is an expert on EU politics, comparative democratic institutions, parliamentary voting behaviour, and parties and elections. He is a Fellow of the British Academy (s.hix at lse.ac.uk).

Mr Mkołaj Dowgielewicz. Director General and representative to the EU institutions of the European Investment Bank. Previously, he was Vice-Governor for Target Group Countries at the Council of Europe Development Bank in Paris. Before that he was Secretary of State for European Affairs and Economic Policy in the Polish government. Dowgielewicz also worked as an adviser on enlargement issues to European Parliament President Pat Cox and as spokesman and member of cabinet of European Commission Vice-President Margot Wallström.

Dr Ignasi Guardans. Lawyer, International Consultant and Media Analyst. Ignasi is a former Member of the European Parliament (ALDE Group), and a former Member of the Spanish Parliament. A respected voice in the Spanish speaking social media, he is a weekly analyst in policy and current affairs in the two largest Spanish radio broadcasts, and a weekly columnist in the largest online digital newspaper in Spanish. He is a senior policy and regulatory adviser, and EU projects manager.

Ms. Carole Brigaudeau: Director of Communications at spirtisEUROPE. She previously worked as Director of the European Forum for Responsible Drinking and as EU Affairs Adviser at EuroCommerce. She has over 20 years of experience in advocacy and communication work at the EU level, covering a wide range of EU policies and stakeholders.

Former Board Members include Sara Hagemann, lecturer in EU politics at the LSE; Julian Priestley, former Secretary General of the European Parliament.